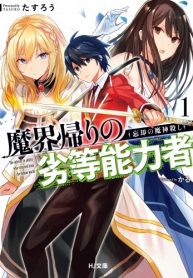 A brief description of the manga Inferior Psychic Underworld Returnee

Doumori Hiroto is a mysterious boy from a lineage of ancient spiritualist who have been guarding the pathway to the underworld for a thousand years.

But he was born with a defect caused by bloodline of magicians mixed into his ancestry.
He possessed both spirit and magic power instead of either, yet he was able to use neither.

For this reason, his grandpa took him to his friend, a chinese sage, to have Hiroto being taught the sage cultivation.
He quickly mastered the sage path and was said equal to a hundred years cultivator.

Somehow, thanks to his sage power he became able to wield his original spirit and magic power.
However, during an incident where he had to unleash his full power, the recoil of that power caused his existence to be erased from everyone’s memory.

The Strange Adventure Of A Broke Mercenary

Simmering Jam at the Edge of the Forest

As A Virtuous Middle-Aged Man, My New Life Was Confirmed To Be Sss Rank

The Descent of the Demonic Master