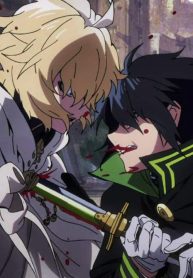 OWARI NO SERAPH (Owari no Serafu)

A brief description of the Seraph of the End: Vampire Reign manga:
In 2012, a catastrophe supposedly caused by a virus claimed the lives of all people over 13 years of age. Then the vampires came out of their hiding places and took over the world under the pretext of protecting the children. These serve the vampires however only as blood donors. To these children belong the two orphans Yūichirō Hyakuya (百夜 優一郎) and Mikaela Hyakuya (百夜 ミカエラ). Four years later, both now 12 years old, the two plan and undertake with the remaining children from the orphanage now an escape from the underground city of the vampires, into which they had been brought.