Read The Fate of the Returned Hero - manga Online in English

The Fate of the Returned Hero 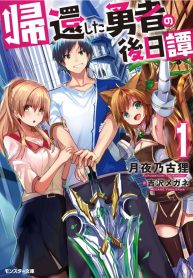 A brief description of the manga The Fate of the Returned Hero:

One day, an ordinary university student, Kashiwagi Yuya, was summoned to another world by a stupid goddess. His mission was to complete all the quests that give each protagonist isekai: become a hero, get a harem, defeat the demon lord, save the kingdom, and return back to Earth. After he completed all these clichéd deeds, he returned to his original world, where only 1 second passed, while in his “heroic” life he lived for 3 years.

He thought he would become an ordinary average student again, but to his great surprise, he noticed that all his skills and abilities of a hero remained with him, even after returning to his world. It looks like his mission is not over yet. Is this issekai, but not isekai? Just read to find out!

I Was Born As The Demon Lord’s Daughter