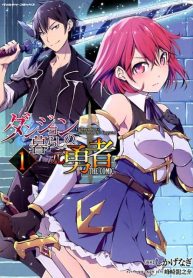 A brief description of the manga Dungeon Kurashi No Moto Yuusha:

After the murder of Lord Demons, Blum Dilmond was forced to flee the country because of persecution by the kingdom. Hiding over and over again from mercenaries hunting for his head, he suddenly gets the idea.

“What if hiding in the empty lair of the Lord Demon I killed? They won’t be looking for me there for sure.”

Without further ado, Blum went to the dungeon, but on the lower levels he suddenly met one of his former comrades, with whom they fought side by side against the Lord of the Demons. Moreover, there they also find the maid, who once served as Lord of the Demons. Now that the interests of the three have crossed, they decided to unite to restore this abandoned dungeon and turn it into their safe haven where you can not fear for their lives.

contains themes or scenes that may not be suitable for very young readers thus is blocked for their protection.