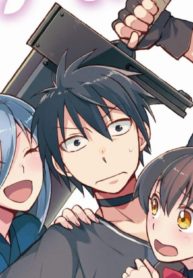 While there was a war between people and demons, the world of Eckler was in danger, and therefore for his salvation was called man. According to his mission, after the world is saved, he must return to a human country. However, he was waiting for the trap of the human king, who was afraid that when the hero got the power, he would take his place. The trapped hero was magically moved, and so he was reborn as a child in our time.

16 years later, the protagonist burns his life in school. He continued to look for a way to return to the other world, even after he was mocked and called a dark guy who always reads books. But all of a sudden, he walks back to the land of the other world. Called to be the hero of a human country… …but this time with his classmates…

Fortunately, he was called to another world five years later, and slipping out of a human country, he decided to meet people like the good old Demon King and the King of the Beasts. However, he continues to get into unpleasant situations. This is the story of a former hero with no motivation.

Let’s Buy The Land And Cultivate In Different World