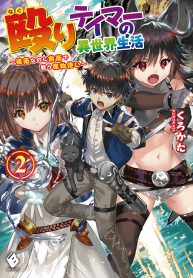 Kaito Arihara, a high school student who has never been liked by animals by nature, is caught up in a magic circle that suddenly appears around his classmate Chisato Shishihara, who he met by chance on his way home from school. Kaito, who has been blown into an unknown space, meets Schiff, a shape shifter, a monster in the shape of a black cat. Schiff discovers the nature of “Tamer” in the unique mana in Kaito’s body, and decided to be his familiar.

However, as a result of the combination of Kaito’s mana and Schiff’s abilities, it turned out that it was more efficient for Kaito to fight by himself than to use his familiar for some reason. Using that ability of him, Kaito is looking for a way of life in this other world.

The whereabouts of Chisato Shishihara, who has been separated with Kaito, the girl called Leafa who knows Kaito’s name that has just been summoned, and the existence of the demon king who moves secretly — the only thing waiting for Kaito is turmoil!? Breaking the norm of “Monster Tamer”, this is the adventure comedy story of “Hit-Tamer” in Another World!!

Slightly confusing, but I see some fun potential