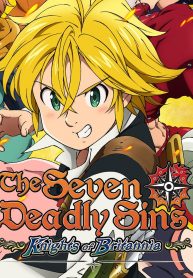 A brief description of the Nanatsu no Daizai(The Seven Deadly Sins) manga:
The “Seven Deadly Sins”, a group of knights who wanted to overthrow the Kingdom of Great Britain, are said to have been wiped out by holy warriors, but there are rumours that some have survived. Ten years later, these holy warriors attempted a coup, were able to kill the king, and are now the new tyrannical rulers of England. Elizabeht, the daughter of the overthrown king, now sets out to locate the “Seven Deadly Sins” and hopes to seek their help to save her kingdom.

The Reincarnated Sage Lives With His Daughters