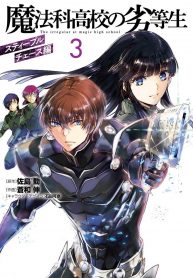 The Irregular at Magic High School – Steeplechase Arc Average 3.7 / 5 out of 11

A brief description of the manga The Irregular at Magic High School – Steeplechase Arc:

In July, the main summer event for high school students of magic will take place – the Nine Schools Tournament.

However, the rules of the current Tournament differ from the previous ones, because a month before the start of the competition, significant changes were made, which made each of the magic schools work tirelessly until the very opening of the Tournament.

As Tatsuya prepares for the competition, a message is delivered to him stating that the Tournament itself is just a cover for something else.

Tatsuya will have to venture into the dark forests of Fuji to counter the impending conspiracy.

I’m the Only One With Genius DNA

DARLING IN THE FRANXX

I Picked Up An Attribute

The King Of BUG