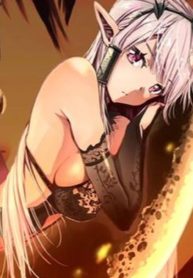 A brief description of the Wicked Trapper: Hunter of Heroes manga:

Echizen, a game developer who is known for making the most complex games to such an extent that it was almost impossible to complete them, earned himself the title of “Trapper of the Gods”. However, he leaves the company when he is not allowed to do what he does best: build traps. Then his destiny takes another sudden turn, when he is transferred to another world, which most would describe by the word “HELL”. He meets the daughter of the Lord of the Demons and manages to find her strength, turning him into a true “God Trapper”. From there begins his journey into this new world, which he perceives as a paradise.