Read A Skeleton Who Was The Brave - manga Online in English

A Skeleton Who Was The Brave 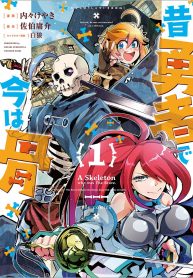 A brief description of the manga A Skeleton Who Was The Brave:

Alvis, the hero, died in battle with the Demon King. However, he continued to live … like a skeleton !?

Having finished his career as a hero who defeated the Demon King, he spent 3 years sleeping, playing and enjoying every day.

One day he decided to find his longtime friend Izana. Alvis registers as an adventurer again and changes his name to Al the Skeleton.

Due to the fact that his appearance was like a skeleton, there can be no talk of trouble in his near future!

It Seems My Body Is Completely Invincible

Exceeding limits can only be handled by reincarnated people

My Husband Hides His Beauty

Mom, Please Don’t Come Adventuring With Me! ~The Boy Who Was Raised By The Ultimate Overprotective Dragon, Becomes An Adventurer With His Mother~