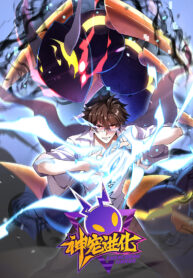 A brief description of the manhua Monster Pet Evolution:

The world experienced a cataclysm and monsters are now roaming the Earth. Born out of a necessity to subjugate these monsters, this new era saw the rise of a new profession. Monster Trainers – individuals who conquer, cultivate, and train these monsters.

Thus begins the story of Gao Peng. An ambitious young man with dreams of his own, who gets launched right into the golden age of monster cultivation. Gao Peng: “Even if it’s a loach, I’ll be able to evolve it into a dragon that can soar to the heavens!”

Im sure ive read this before but it was a bit different.

Is a good read, I like the fact that its different from all the other manga’s that are coming out. Where the world changed and got a bunch of dungeons and stuff. Also I like seeing creatures evolve

Review:
STORY 9/10
-though lots of manhua cliches,and though sounds like a ripoff pokemon, its worth the read , i just love monster evolving plot,not like VR monster fantasy like the other mnhwa, we need more pokemon ripoffs!

It is a good series so far but admittedly it is sometimes a bit hard to understand, the translation isn’t perfect but still worth reading.

Why does the description of this sound like a copy of versatile mage and monster tamer?

Its a good read.

The Jack Of All Trades

Mejaz – Regulus In The World