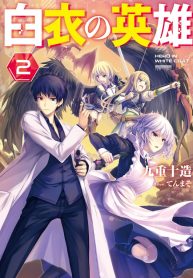 A brief description of the manga Hero In White Coat:

Tenchi Kaito is a rare genius scientist. When he wakes up one day, he has been transferred to another world. Kaito obtains rare magic called “Creation” that allows him to create things he once saw. With the help of a female mercenary, Kaito lives with her, earns money by using his creation magic, and spends his days in peace and fun.

But he still manages to get caught up in various disturbances. Using his unparalleled brain and creative magic, he lays waste to his enemies! Other than athleticism and a good sense of naming, this is an otherworldly fantasy due to a natural disaster that’s perfect!

The Fiancees Live Together

Capture the Golem and Escape Poverty

MY WIFE IS A DEMON QUEEN