Kenja no Deshi wo Nanoru Kenja 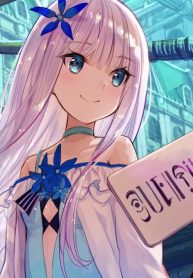 賢者の弟子を名乗る賢者 (Japanese); She Professed Herself the Pupil of the Wise Man (English)

A brief description of the Kenja no Deshi wo Nanoru Kenja manga:
Kagami is an experienced player in BP MMORPG Ark Earth Online. His avatar was an elderly bearded magician, but one day he bought an object that changed his appearance, turned his character into a girlfriend and fell asleep. And he woke up in the same game that felt like the real world, and now his character is a young girl.