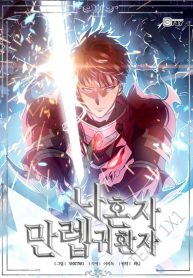 A brief description of the manhwa Max Level Returner:

A total of 120 million people disappeared from all over the world. [You have successfully completed the final quest, and have been given the reward: ‘Return’.] In 22 years, Yoon Sang-Hyuk, was finally able to beat the most atrocious survival game.

The man who became the ‘One Man Army’, and the strongest out of all of the other players, he had finally returned back to reality. And not just that, he came back with a reward that nobody had ever received before. [Masked Monarch, Return] This is the start of the Max Level Returner!

Tensei Shitara Slime Datta Ken: The Ways Of Strolling In The Demon Country

Dad is a Hero, Mom is a Spirit, I’m a Reincarnator

May I Please Ask You Just One Last Thing?