The Irregular of the Royal Academy of Magic 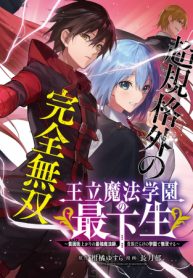 Oritsu Maho Gakuen no Saika-sei~ Hinkon-gai (Suramu) Agari no Saikyo Maho-Shi, Kizoku-darake no Gakuen de Muso Suru~; The Irregular of the Royal Academy of Magic ~The Strongest Sorcerer From the Slums is Unrivaled in the School of Royals ~; 王立魔法学園の最下生 ～ 貧困街上がりの最強魔法師、貴族だらけの学園で無双する ～

A brief description of the The Irregular of the manga Royal Academy of Magic:

A world in which magic can only be used by people born into a noble family.

Although he was a commoner, Ars possessed a great magical talent, he was called “Cursed Blood” and was forced to lead an oppressed life.

He was expelled from the family home at a very young age and spent ten years training to be a magician. At the age of 15, Ars is invited to enter the magic academy to become an “official magician.”

When he arrived at the academy gates, a group of very low-level nobles were waiting for him. (This is silly. This naive thinking will not work in real battles.)

Ars, enrolled in an academy full of nobles, begins an extraordinary life as the only “ordinary person” in the academy.

the mc is bland, the girls surrounding him are bland, and its pretty boring ngl

its alright pretty much copy and paste though

its good manga i recomend it for reading.

“The Irregular of the Royal Academy of Magic”

Lol Sounds just like “The Irregular at Magic High School,” it even has an op MC too

A bit derivative reminds me of Mahōka Kōkō no Rettōsei but if it’s a good story I’ll still follow it. Just don’t outright copy some of Tatsuya’s coolest moments (like the finger snap to the ear).

this is interesting… bookmarking this

The King Of BUG