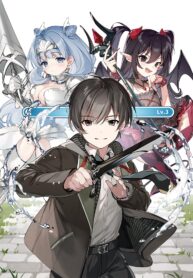 The Story of an Exploration Hero Who Has Worked His Way up From Common People Average 4.8 / 5 out of 5

A brief description of the manga The Story of an Exploration Hero Who Has Worked His Way up From Common People:

Takagi Kaito, a low status high schooler, your typical Mob character so to say, was just a normal everyday explorer who hunted slimes every day in the dungeons that appeared in Japan, earning pocket money while admiring his childhood friend, the class madonna, from afar.

One day, a golden slime he had never seen appears before him. After he defeats it, he obtains an extremely rare item worth hundreds of millions as a drop, a servant card that can summon mythical beings!!

After he makes up his mind and summons it, a warrior maiden with unparalleled beauty appears. Rise above being just a mob explorer Kaito! A modern battle fantasy story has begun!

The World’s Strongest S-Class Adventurer, Known as the Thunder Emperor, Shows His Power Without Restraint and Becomes a Warrior in the Magic Academy

Rise From The Rubble

The Way That Knight Lives as a Lady