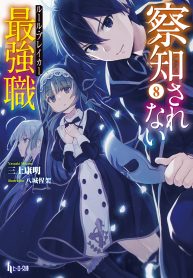 The Undetectable Strongest Job: Rule Breaker Average 4.4 / 5 out of 14

A brief description of the manga The Undetectable Strongest Job: Rule Breaker.

By some ill fortune, Hikaru died in a traffic accident. He was in heaven standing in line, waiting to be judged, when he took an unexpected request to transfer his soul to a person in another world. He received an ability called Soul Board which he could use to allocate points to Skills to make himself more powerful.

But there was a catch…

「I want you to kill someone for me within an hour. If you don’t, I’ll destroy your soul.」

To pull off the task assigned to him, he poured all his available points to the Stealth skill tree.

This is a story of a boy who specialized in Stealth. With his skill trees as weapons, he would demonstrate his unrivaled strength in another world.

honestly, kinda shit compared to the LN. it’s skipping over sooooo much info, half of the skill names on the soul board arent even translated right, and the blessings arent translated well either. the fewer characters (in japanese) it has, the stronger the blessing. the translator doesnt do anything to indicate how many characters each one has. And even that, which is a pretty fundamental part of how the world’s powers works isn’t explained well either.

Yari No Yuusha No Yarinaoshi

Past Lives of the Thunder God

The Strong Man From The Mental Hospital