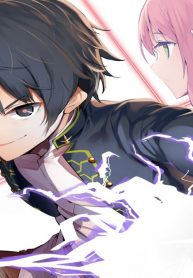 The Unsuccessful Yet Academically Unparalleled Sage ~A Cheating S-Rank Sorcerer’s Post-Rebirth Adventurer Log~ Average 4.8 / 5 out of 20

A brief description of the “The Unsuccessful Yet Academically Unparalleled Sage ~A Cheating S-Rank Sorcerer’s Post-Rebirth Adventurer Log~” manga:

After his rebirth in another world, the great sorcerer Ephthal devoted his life to the study of magic. However, aiming to become a master in magic, Ephthal knew that his talent has a limit beyond which not to jump. Because of this, he fell into despair, which affected his entire life. But now, 400 years later, he was reborn again and entered the magic academy, using the knowledge left from his past life. As if laughing at the magicians of his new age, among whom there were not particularly talented, he easily mastered the most legendary spells! With his incredible power, the whole world will kneel before his power!

Record of the War God