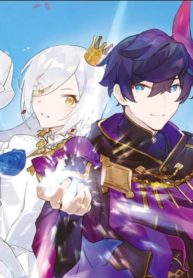 Welcome to the Impregnable Demon King Castle ~The Black Mage Who Got Kicked Out of the Hero Party Due to His Unnecessary Debuffs Gets Welcomed by the Top Brass of the Demon King’s Army~ Average 4.9 / 5 out of 26

A brief description of the “Welcome to the Impregnable Demon King Castle ~The Black Mage Who Got Kicked Out of the Hero Party Due to His Unnecessary Debuffs Gets Welcomed by the Top Brass of the Demon King’s Army~” manga:

In this era, adventurers, demons, Heroes and Demon Lords are no longer professions that put someone’s life at stake. With the world at peace, there came an era in which dungeon conquest turned into entertainment. Adventurers and monsters are able to fight with a substitute body made of magic, popularizing the conquest of the dungeons without death. On a continent where dungeon conquests are broadcast live, the team I was associated with was to be the 4th most popular in the world. However, since the rules prescribed that the team should consist of no more than 5 members, I was told that I was preventing them from climbing to the 3rd place because I was the Black Magician, the least popular job.

After losing my job, I tried my best to find another team until one day a beautiful woman appeared in front of me and told me that she had a job for me. Impressed that her abilities were rated higher than those of my former comrades, I finally went to an interview before I heard what the job was. In the deepest part of the dungeon with the highest difficulty, in the Castle of the Demon Lord, one of the Four Devs (the Four Heavenly Kings) was waiting for me. This is the story of the Black Sorcerer, who was expelled from the Hero’s team and then joined the army of a Demon Lord and reflects the heroes.