Read Father, I Don’t Want to Get Married! - manga Online in English
NEW

Father, I Don’t Want to Get Married! 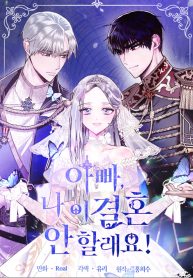 N/A, it has 3K monthly views

A brief description of the manhwa Father, I Don’t Want to Get Married!:

The main character is the villainess from the novel she has read into which she finds herself. She was doomed to die, but no!

– With memories from my past life, I will avoid my death flag!

– I will not marry a man who has no honor, family, property and even power!
When I announced my desire to live a glorious and glamorous life, my dad decided to make the crown prince my fiance ?! Is he out of his mind ?! I’ll just take the engagement agreement as a last resort.

– Why do you avoid being engaged to the crown prince?

– Because I’m afraid! He immediately kills people who do not obey him!

A few days later, the Crown Prince sent me a letter: “Don’t worry, I won’t kill you.”

Oh no… Have I already done something that could get me killed?