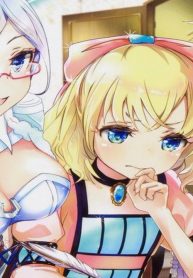 A brief description of the Isekai Yakkyoku manga:

A young Japanese scientist – pharmacologist died of overworking. He opens his eyes and sees that he was born in Europe. Now he is a little student of the famous royal pharmacist, who has achieved extraordinary skills in the definition of diseases, the ability to synthesize and separate liquids. Thanks to this, he became an emperor and opened his own pharmacy on the edge of town.