Read My Twin Sister Was Taken as a Miko and I Was Thrown Away but I'm Probably the Miko. - manga Online in English

My Twin Sister Was Taken as a Miko and I Was Thrown Away but I’m Probably the Miko. 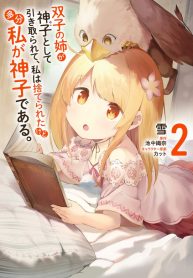 A brief description of the manga My Twin Sister Was Taken as a Miko and I Was Thrown Away but I’m Probably the Miko:

Two twin sisters lived in the same family. One of them, named Lerunda, was treated unfairly, constantly compared with her twin sister, whose personality was brighter and more beautiful.

When the time came to choose from the two twin sisters for the role of Priestess, only one sister was left, and the other was considered unnecessary and got rid of her, throwing her into the forest.

In the forest, Lerunda meets both the Griffin and the Heavenly Horse, and here her adventures begin.

Hero? I Quit A Long Time Ago

Path of the Shaman