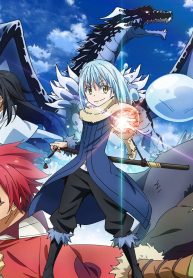 Regarding Reincarnated to Slime

A brief description of the Tensei Shitara Slime Datta Ken manga:
Satoru Mikami, in his mid-thirties, is an employee and satisfied with his life, but would like to have a girlfriend. He is jealous of his colleague, who has just got engaged to the most beautiful woman in the company. When the two are attacked, Satoru comes to their aid and is stabbed himself. A computer voice speaks to him and when he wakes up again, he can’t move or see anything. After a while Satoru realizes that he has been reborn as a living lump of slime.