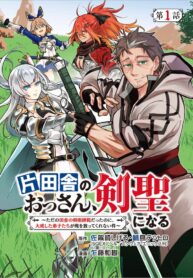 Backwater Old Man Becomes a Swordmaster Average 4.7 / 5 out of 15

A brief description of the manga Backwater Old Man Becomes a Swordmaster:

Beryl Gardenant is a man who diligently manages a fencing dojo in a countryside village. Where did that swordsman, full of dreams of glory, go? Nowadays he just lives life calling himself a “useless old man”.

“I guess I’ll just keep living a quiet life as the years go by.” One day, while living this carefree life, he is visited by Aleutia, a former student who has risen to the post of royal knight. “I have recommended you as the special royal knight instructor.” “…what?”

Still stunned, Beryl goes to the royal capital, reuniting with other former pupils, such as the strongest adventurer and an S-rank magician, all of them… begging for his instruction!? “You definitely don’t need me anymore…”

Beryl goes on, always in self-deprecation. With an unparalleled swordsmanship, fostered for years, his deeds are acclaimed in the capital, where he is known as the “Backwater Swordmaster”. “ISN’T THAT TITLE UNCOOL!?” The “master” of the strongest pupils of all time finally gets rewarded, a fantasy about a “new rich” middle-aged man!

Hm, new manga with an overall rating of 4.8. Interesting.

I Am the King

There Was a Cute Girl in the Hero’s Party, so I Tried Confessing to Her