Read Accomplishments of the Duke's Daughter - manga Online in English

Accomplishments of the Duke’s Daughter 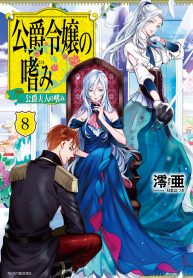 Accomplishments of the Duke’s Daughter Average 4.6 / 5 out of 20

A brief description of the manga Accomplishments of the Duke’s Daughter:

The main character was a simple office worker living in modern Japan. But one day she gets hit by a car. Opening her eyes, she realizes that she is in the Otome world of the game that she used to love to play.

But that’s not all that happened …

It turns out that she became the rival of the main character in the game and the villainess. Faced with a situation that is “bad” for her, she decides to change her destiny.

But will she succeed? Will she be able to bear the burden that her father placed on her?

So this is dead right?

I have a problem with the realism of that manga: from when the bank interest make the society more equal and is a solution for poverty,. I can’t make abstraction of this

This is a 50/5. Absolutely amazing, I would say that the start is a bit slow but it keeps getting better and better, and it just doesn’t stop getting better. As of the time I’m writing this I’m at Chapter 50.
And the character of Iris, is just, perfect. She has her weakness but is super impressive all the while staying humble. Truly, I didn’t expect this manga to be THIS good.
So it depends on your tastes, but really, give this one a chance. (the chapters a pretty long too)

I have read about 60 chapters. This is a nice shoujo nation building manga with tidbits of romance and slice of life.

I Have A Dragon In My Body

Path To The Apex