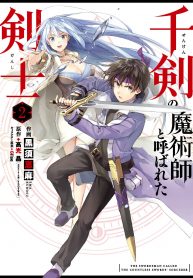 The Swordsman Called The Countless Swords Sorcerer Average 4.3 / 5 out of 38

A brief description of the manga The Swordsman Called The Countless Swords Sorcerer:

Magic, which allows you to control swords from a distance, simply destroys any enemy, leaving him no chance. Ardis possesses magical art that no one has ever known about before. He’s a mercenary, and he performs various tasks. In exchange, he gets a decent paycheck.

On his way home after another mission, he met two twins. They were attacked by bandits, and our hero saved the girls. But in this world, twins are nothing but an abomination.

Now their team, together with their partner Ardis, decided to change the world in which the twins have no place because of the “Intervention of the Goddess”. This manga will tell you about Mage, the swordsman.

I Will Quit Being the Hero