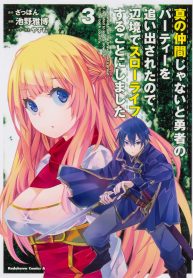 I Was Kicked Out Of The Hero’S Party Because I Wasn’T A True Companion So I Decided To Have A Slow Life At The Frontier Average 4.5 / 5 out of 50

The young girl has an older brother – Red. She uses the divine protection of the Hero and fights with the Demon Lords. His Divine protection of the Guide helps him only at the initial level. This protection does not provide magic or mastery of martial arts, so it often loses battles. One day, his friend Sage began to blame him. The sage called him a false companion and, taking all the equipment, bent out of the group, retaining from him only a copper sword.

This broke Red’s heart, and he decided not to fight the Demon Lords anymore, knowing that only he could save the world. Red began to live an ordinary life in a remote wilderness. He began to earn the money needed to open a herbal shop. He used his knowledge, which he acquired during his journey. You will learn further events that took place with Red by reading the manga!

There Was a Hero

You Are The Cindery Witch That Will Not Die