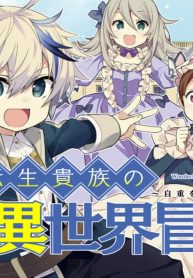 A brief description of the Tensei Kizoku No Isekai Boukenroku ~Jichou Wo Shiranai Kamigami No Shito~ manga:

The hero of the manga, Shiina Kazuya, died under strange circumstances to be associated with his girlfriend. She was literally obsessed with magic and fantasy stories. Kazuya turns into young Cain Von Silford.

I was baptized on my fifth birthday, according to the traditions of the world in which I live. Something went wrong, I got magical abilities called “Blessing of the Gods.” It turns out that the Gods themselves paid attention to me and awarded me with abilities? … My status has changed after that …. What awaits me ahead?

Level 1 With S-Rank Drop Rate Is The Strongest